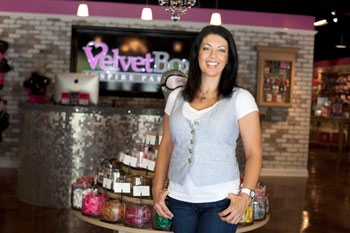 Be Gentle With Them

Amid the trendy eateries, stylish shops, and upscale apartments of West 7th Street is a new business that at first looks like just another boutique. But the Velvet Box is also the place to go for what the proprietor says are some of the best vibrators, personal lubricants, and sex books in town.

A sex shop in the same ’hood as the In-N-Out Burger, a winery, and pricy restaurants? It was a prospect that apparently made some area property managers perspire — but not from excitement.

They needn’t have gotten all hot and bothered. Technically and aesthetically, the Velvet Box seems to fit the neighborhood just fine. It offers no adult videos, nudie magazines, or any images of naked people. And proprietor Marcelle LeBlanc said couples and families with kids are welcome — and would be comfortable — in her shop. What’s more, another well-known and highly successful local businessman is listening to her advice on some new products.

LeBlanc, 38, knows the difference between an adult video store and her high-end romance shop. A native of a small town in Louisiana, she graduated from college in California with a degree in ornamental horticulture and greenhouse production. She went to work for a greenhouse production facility but found she didn’t like the solitude. She got a job as a supervisor at Costco, switched jobs again, then posted a resumé online. That led to a position as buyer for an online adult DVD distributor, where she learned many aspects of the adult film industry — marketing, packaging, and production.

“The money was good, and I got to travel,” LeBlanc said. “But I really didn’t know what I was getting into.”

From there, LeBlanc landed a luxurious gig with an international adult entertainment company. She traveled around the world working behind the camera, filming and representing actors. Ten years later, in 2008, wanting to be closer to family, she came to Texas as vice president of operations for Christal’s , an adult novelty store.

The Christal’s job convinced LeBlanc that she wanted to start her own business, one that targeted people who might be interested in sex toys and other products but were terrified of going into the typical Texas adult novelty shop.

So LeBlanc found a partner to provide the capital, and in late 2009 she opened up her first store in the Alliance corridor, in a shopping center owned by Sam Moon.

It wasn’t easy. “I had to ask for a meeting five different times with the Sam Moon folks,” she said. The company officials were afraid of allowing LeBlanc’s concept into their shopping center. When they finally agreed to meet her at a family restaurant, she wowed them with her knowledge of the business — and a box of tasteful yet tantalizing products. She promised not to carry videos or products showing nudity.

But she still had her eye on a spot off West 7th — her first choice — another place where she’d met with skepticism and fear. Again, she talked to property owners about renting a space. It didn’t go well. Nobody would lease to her, even in a recession, even though her business was well-funded. Some told her they’d rather let their properties stay vacant than rent to her. And the few who were willing to consider it wanted to control what LeBlanc sold.

“People are fearful — we’re in the Bible Belt, it’s sex,” she said. So LeBlanc, as she has many times in her life, went her own way.

With the help of Panther Real Estate Solutions, she found a building to buy. She renovated it and stocked it with high-quality adult toys, lingerie, books, personal lubricants, and bachelorette party goods. Today, the shop is profitable and looks mostly like a chi-chi lingerie boutique, but with displays of vibrators and artfully displayed lubricants. The average sale ticket at the Velvet Box is $60 — high for retail.

According to LeBlanc, it’s different from just about every other such business in the country. And despite the fear and discrimination, she said, people are interested. “It’s like a cat coming into bed at night. They look around, and then they come back.”

Karen and John are a newly married couple living in an apartment off West 7th Street. Neither had heard of the Velvet Box. They were interested but wary.

“I’d probably go check it out,” Karen said. “I’m not opposed to it, but I doubt I’d purchase anything. … If it’s not like an X- rated shop, then it doesn’t matter; it’s just a boutique selling items.”

Operators of at least some neighboring West 7th businesses are supportive.

“If it’s a woman-owned business, we’re supportive of it,” said Robin Birdsong, co-owner of Fig Designers, a European fashion boutique. Birdsong thinks LeBlanc might have found just the right location.

Much of LeBlanc’s business is repeat customers and referrals. She described her typical customer as a woman in her mid-30s to 40s, looking to “spice things up.”

After all, she said, “When you’ve been married for 10 years, turning off the Cowboys game is not foreplay.”

So what does LeBlanc recommend for a new customer who wants to add some sizzle to a relationship? One word: lubricant. “You’d be surprised how much lubricant can change your life. And it’s fun,” she said.

About six months ago, LeBlanc ran into Reata restaurant owner Mike Micallef at a Fort Worth Chamber of Commerce breakfast. Not only is Micallef in the business of fine food, but his family also owns Jamak Fabrication , one of the largest silicone manufacturers in the country. The Weatherford-based company sells to the automotive, healthcare, and dairy industries, producing things like windshield wipers and tubing.

When Micallef found out what LeBlanc does for a living, he told her they should start collaborating. What’s the connection? Silicone-based lubricants are a natural extension for Micallef’s company, and LeBlanc knows the product.

“Her input has been instrumental in the development of the market’s highest- quality personal lubricant, and we look forward to a continuing relationship of synergy and success,” Micallef said.

LeBlanc said the Jamak folks “have really been paying attention to everything we’ve been saying, and now they’ve come back with this amazing product.” That product should be hitting shelves at the end of this year.

“Very shortly we, [Fort Worth] may have our very own brand of silicone lubricant,” LeBlanc said.

Not all local businessmen were as welcoming as Micallef. “People were scared of me,” LeBlanc said.

The first time Marilyn Gilbert, executive vice president of marketing for the Fort Worth Chamber, walked into the Velvet Box, she looked like a deer in headlights, LeBlanc said.

The women ended up talking, and Gilbert stayed for two hours. Gilbert said she respects LeBlanc’s business sense and success in marketing.

Since then, Chamber events have become somewhat easier for LeBlanc. “It’s one of the best Chambers around,” she said. “But it’s a very conservative group that was tough to crack.”

LeBlanc believes in live-and-let-live, but Texas isn’t a very tolerant state. Remember the mother from Burleson who was arrested in 2003 for hosting a “passion party”? Up until three years ago sex toys like the ones sold at the Velvet Box were illegal under Texas obscenity law.

In LeBlanc’s eyes, all human actions and reactions can be boiled down to love and fear. “They fuel everything we do,” she said. “When people get angry, I ask myself, ‘What are they scared of?’”